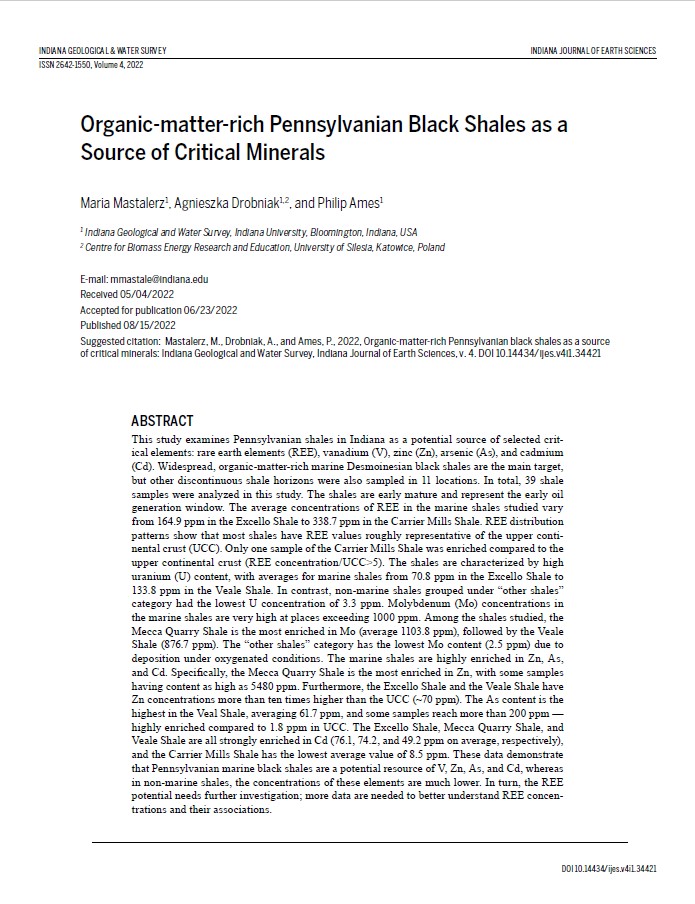 This study examines Pennsylvanian shales in Indiana as a potential source of selected critical elements: rare earth elements (REE), vanadium (V), zinc (Zn), arsenic (As), and cadmium (Cd). Widespread, organic-matter-rich marine Desmoinesian black shales are the main target, but other discontinuous shale horizons were also sampled in 11 locations. In total, 39 shale samples were analyzed in this study. The shales are early mature and represent the early oil generation window. The average concentrations of REE in the marine shales studied vary from 164.9 ppm in the Excello Shale to 338.7 ppm in the Carrier Mills Shale. REE distribution patterns show that most shales have REE values roughly representative of the upper continental crust (UCC). Only one sample of the Carrier Mills Shale was enriched compared to the upper continental crust (REE concentration/UCC>5). The shales are characterized by high uranium (U) content, with averages for marine shales from 70.8 ppm in the Excello Shale to 133.8 ppm in the Veale Shale. In contrast, non-marine shales grouped under “other shales” category had the lowest U concentration of 3.3 ppm. Molybdenum (Mo) concentrations in the marine shales are very high at places exceeding 1000 ppm. Among the shales studied, the Mecca Quarry Shale is the most enriched in Mo (average 1103.8 ppm), followed by the Veale Shale (876.7 ppm). The “other shales” category has the lowest Mo content (2.5 ppm) due to deposition under oxygenated conditions. The marine shales are highly enriched in Zn, As, and Cd. Specifically, the Mecca Quarry Shale is the most enriched in Zn, with some samples having content as high as 5480 ppm. Furthermore, the Excello Shale and the Veale Shale have Zn concentrations more than ten times higher than the UCC (~70 ppm). The As content is the highest in the Veal Shale, averaging 61.7 ppm, and some samples reach more than 200 ppm — highly enriched compared to 1.8 ppm in UCC. The Excello Shale, Mecca Quarry Shale, and Veale Shale are all strongly enriched in Cd (76.1, 74.2, and 49.2 ppm on average, respectively), and the Carrier Mills Shale has the lowest average value of 8.5 ppm. These data demonstrate that Pennsylvanian marine black shales are a potential resource of V, Zn, As, and Cd, whereas in non-marine shales, the concentrations of these elements are much lower. In turn, the REE potential needs further investigation; more data are needed to better understand REE concentrations and their associations.