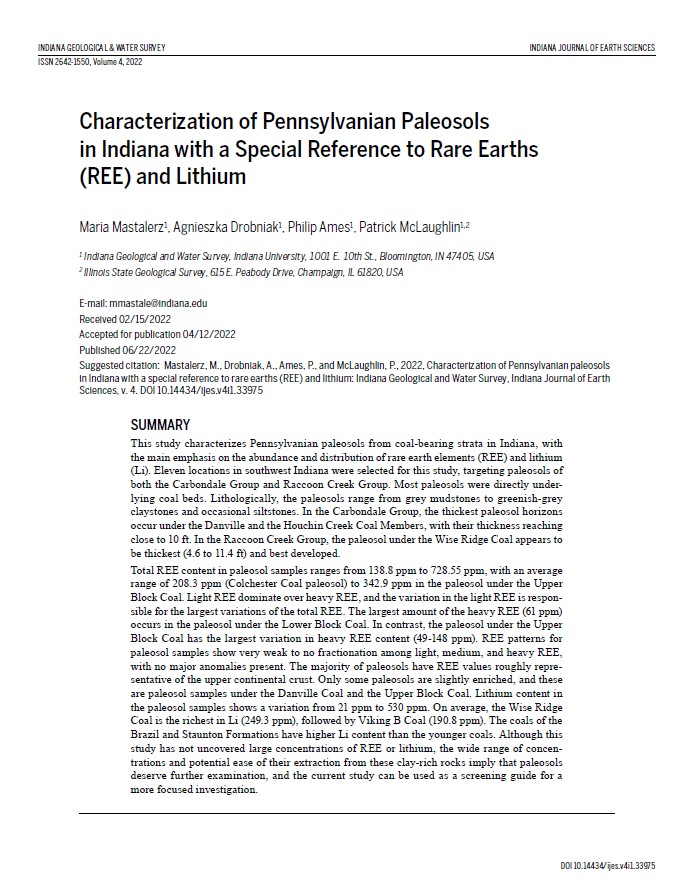 This study characterizes Pennsylvanian paleosols from coal-bearing strata in Indiana, with the main emphasis on the abundance and distribution on rare earths (REE) and lithium (Li). Eleven locations in southwest Indiana were selected for this study, targeting paleosols of both the Carbondale Group and the Raccoon Creek Group. Most paleosols were directly underlying coal beds. Lithologically, paleosols range from grey mudstones to greenish-gray claystones and occasional siltstones. In the Carbondale Group, the thickest paleosol horizons occur under the Danville and the Houchin Creek Coal Members, with their thickness reaching close to 10 feet. In the Raccoon Creek Group, the paleosol under the Wise Ridge Coal appears to be thickest (4.6 to 11.4 feet) and best developed.

Total REE content in paleosol samples ranges from 138.8 ppm to 728.55 ppm, with an average range of 208.3 ppm (Colchester paleosol) to 342.9 ppm in the paleosol under the Upper Block Coal. Light REE dominate over heavy REE, and the variation in the light REE is responsible for the largest variations of the total REE. The largest amount of the heavy REE (61 ppm) occurs in the paleosol under the Lower Block Coal, whereas the paleosol under the Upper Block Coal has the largest variation in the heavy REE content (49 to 148 ppm). REE patterns for paleosol samples show very weak to no fractionation among light, medium, and heavy REE, with no major anomalies present. The majority of paleosols have REE values that are roughly representative of the upper continental crust. Only some paleosols are slightly enriched and these are paleosol samples under the Danville Coal and the Upper Block Coal. Lithium content in the paleosol samples shows a variation from 21 ppm to 530 ppm. On average, the Wise Ridge Coal is richest in Li (249.3 ppm), followed by Viking B Coal (190.8 ppm). The coals of the Brazil and Staunton Formations have higher Li content than the younger coals. Although this study has not uncovered large concentrations of REE or lithium, the wide range of concentrations and potential ease of their extraction from these clay-rich rocks imply that the paleosols deserve further examination, and the current study can be used as a screening guide for more focused investigation.