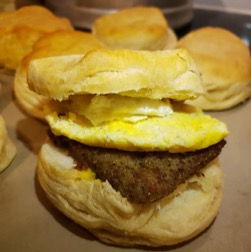 Through interviews with western North Carolinians and an analysis of the discourse in online articles, this essay first argues for the importance of foodways research into one insular culinary practice by acknowledging its use in community identity formation. Livermush, a square, sausage-like product made of pig liver, face meat, and cornmeal, is closely related to scrapple but only available in the western portion of North Carolina. Often when locals try to introduce the food to others they are met with disgust, causing shame for the food and the community who eats it. This essay examines food shaming reactions to livermush both in person and in print to detail how capitalizing on these negative judgments has allowed locals to manifest representations of regional pride that are changing the tradition by allowing livermush to be used both as an ordinary food and a reason for celebration.

Digest: A Journal of Foodways & Culture Article Publishing Agreement The Foodways Section of the American Folklore Society (the "Publisher") and Author(s) agree as follows:

1. Publication and Promotion: In consideration of the Publisher's agreement to publish the Work, Author(s) hereby grant and assign to Publisher the non-exclusive right to print, publish, reproduce, or distribute the Work throughout the world in all means of expression by any method known or hereafter developed, including electronic format, and to market or sell the Work or any part of it as the Publisher sees fit. Author(s) further grant Publisher the right to use Author name(s) in association with the Work in published form and in advertising and promotional materials.

2. Copyright: Copyright of the Work remains in the Author(s)’ name(s), and Author(s) grant the journal right of first publication.

3. Prior and Post Publication and Attribution: Author(s) agree not to publish the Work in print form prior to publication of the Work by the Publisher. Author(s) may enter into separate, additional contractual arrangements for the non-exclusive distribution of Digest’s published version of the work (such as posting to an institutional repository or publishing in a book), with an acknowledgment of its initial publication in this journal. Author(s) agree to cite, by author(s), title, and publisher, the original Digest: A Journal of Foodways & Culture publication when subsequently publishing the Work elsewhere.

4. Author Representations: The Author(s) represent and warrant that the Work: (a) is the Author(s)’ original Work and that the Author(s) have full power to enter into this Agreement; (b) does not infringe the copyright, property, proprietary or personal rights of any third party; and (c) contains no material that is obscene, libelous, defamatory or previously published, in whole or in part, except as follows: when apparently “obscene, libelous, defamatory” information is considered integral to the foodways material under consideration (as in a quoted passage), has been fully vetted among editorial board members, and judiciously interpreted, described, and otherwise presented in the publication to clarify its inclusion and intent. Previously published material, in whole or in part, must meet ordinary fair use expectations concerning length and attribution. (d) If the Work contains any material that is owned or controlled by a third party (for instance, images used in the article), Author(s) warrant and represent that he/she/they have obtained permission for its use and that the material is clearly acknowledged within the text. Author shall indemnify and hold Publisher harmless against loss of expenses arising from breach of any such warranties.

5. Licensing and Reuse: While Digest adopts the above strategies with respect to best open access journal practices, it has not yet adopted Creative Commons licensing. It urges authors to promote use of the publication in Digest, in lieu of subsequent duplicate publication of unaltered papers, and to acknowledge the investments made by peer reviewers, editors, copy editors, programmers, layout editors, and others involved in supporting the work’s original publication in Digest.

Henderson, Laretta. 2007. “Ebony Jr!” and “Soul Food”: The Construction of Middle-Class African American Identity Through the Use of Traditional Southern Foodways. MELUS 32 (4): 81-97.

Long, Lucy. 2018. Livermush. In We Eat What?: A Cultural Encyclopedia of Unusual Foods in the United States, ed. Jonathan Deutsch, 203-205. Westport: Greenwood Publishing.

Sartre, Jean-Paul. 1984. Being and Nothingness: A Phenomenological Essay on Ontology, translated and with an introduction by Hazel E. Barnes. New York: Washington Square Press.

Zimmern, Andrew. 2014. There you have it! Livermush explained, Bizarre Foods with Andrew Zimmern, season 4 episode 4, May 5, YouTube, posted by kurtis, https://www.youtube.com/watch?v=a49aaqn_Zjo .